The 5 best activities to discover Prague with friends

Once considered a cheap, lesser-known spot for a bargain holiday, the gorgeous city of Prague is now an unmissable European travel destination. Wander among famous bridges and take in famous sights like the Old Town Square and the Jewish Quarter. With its fairytale architecture and winding streets full of pop-up bars and historic churches, Prague is the perfect place to explore with your friends.  Read on for 5 of the best activities to discover the best of Prague with friends.

1. Take panoramic photos at the top of the Petřín Tower

Prague’s answer to the Eiffel Tower is the perfect spot to snap some truly stunning photos of the city skyline. Czech visitors to the Paris Exposition Universelle of 1889 were so inspired by the Eiffel Tower that they raised the money to build their own in Prague. Situated at the top of Petřín Hill, the lookout tower stands at 64m tall and features two observation decks for prime views over the city.

To reach the Petřín Tower it’s a half hour walk up Petřín Hill. However, you can skip the steep climb by hitching a ride on handy funicular from the hill’s base. The funicular runs every 10-15 minutes with a halfway stop at the classy Nebozizek Restaurant.

If you’re coming from the center by tram, keep your ticket with you for free entry onto the funicular. At the tower, there’s an elevator to take you to the top, or you can squeeze in a workout by taking the 299 steps to the top observation deck. There, you can take some snaps of the city and the winding river, plus the essential group selfie. On a clear day, you might even spot the faraway peak of Snezka, the Czech Republic’s highest mountain!
Now that you’ve climbed Petřín Hill, why not check out the other attractions around the tower? Here you’ll also find an observatory and museum, cafes, a gorgeous rose garden, and even a hall of mirrors!

2. Rent a pedalo and cruise the River Vltava

In contrast to the busy tourist hotspots of the Old Town square and Charles Bridge, taking a cruise down the river is a moment to relax with your friends. Rent a few pedalos: pedal powered boats, sometimes shaped like cars or swans. These people-powered boats usually sit two or three people, but some large boats can take 10 or more!

Rented by the hour, pedalos are one of the best ways to see the Vltava River. This 434km long river flows right through the center of Prague. The river divides Prague’s Old and New Towns from the Lesser Town and Prague Castle, which you can often see from the water. As you float under some of Prague’s famous bridges and past the river banks lined with cafes and picnickers, see if you can spot the groups of local swans that frequent the river.

When your time is up, take your group to one of the numerous riverside restaurants for a bite to eat. Many boast waterfront terraces where you can relax and watch the river roll by. Find pedalo rental companies along the Vltava River and on Slovansky Island.

3. Add your artwork to the John Lennon Wall

The ephemeral artwork of the John Lennon wall near the Charles Bridge is a must-see Prague attraction. This graffitied wall on Velkopřevorské náměstí (Grand Priory Square) became a memorial to John Lennon after his murder, in 1980.

Since the 1960s this once unassuming wall has been scrawled with messages of love and protest against the Communist regime. Following the suppression of new democratic reforms in the late 1980s by the Communist government, young Czechs would protest by writing on the wall. An unknown artist painted a portrait of John Lennon along with some of his lyrics as a symbol of freedom.

Over the years, the original portrait of John Lennon’s face has become obscured by layers and layers of new artworks. The ever-changing layers of paint are a platform for political protest in the local and international community while retaining the message of love and peace.

Artists and visitors from across the world have all made their mark on the colorful wall. Bring a pencil or marker with you to leave your own messages in the white ‘free zones’.

SaturYAY drinks on rooftops! ✧ What are your plans this weekend? ✧

As the top beer drinking nation on the planet, it’s a well-known fact that in Prague, beer is cheaper than water! Jump into Prague’s vibrant brewing culture and sample local beers with a Prague beer tour. This is a great way to find some of Prague’s hidden gems and local haunts while tasting both popular and craft beers.

The Czech people have been drinking beer for over 1000 years, from as early as the year 993. In the 13th century, the famous Czech King Wenceslas even convinced the Pope to revoke a ban on beer brewing. This success earned him his nickname of the Good King Wenceslas!

We recommend booking onto Urban Adventures’ beer and tapas tour, which takes you around locally-owned beer halls and breweries across Prague’s neighborhoods. This is the perfect way to avoid the tourist traps! Not only that, you’ll get a fascinating insight into Prague’s beer culture across the centuries. You’ll try local lagers and ales, nibble on some traditional beer snacks, and take home a Prague beer map. Join another small group or book a private tour for you and your friends at Urban Adventures.

5. Watch the sunset at Riegrovy Sady

The most beautiful place to watch sunset 🌅 Enjoy!

Wrap up the day by joining the locals to watch the sunset over the city at the Riegrovy Sady park. This popular park has welcomed locals for over 100 years. Once a vineyard, Riegrovy Sady’s wide grassy areas and 1920s Classical style lookout make it the perfect spot to wind down after a long day in Prague.

One of the many great things about Prague is that it’s 100% legal to drink alcohol in public places. Bring a beer, some snacks, and a blanket and settle in to soak up the spectacular sunset. During the golden hour, the colors shift across the hill and rays of light illuminate Prague Castle in the distance. This is the perfect spot for you and your friends to finish your day of activities before heading back to your hotel (or maybe out to experience some of Prague’s nightlife!).

Looking for more things to do in Prague? Check out our guide for what to see and do in the Czech capital! 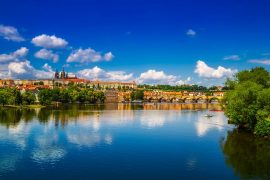 Prague: What to see in this jewel of Central Europe?